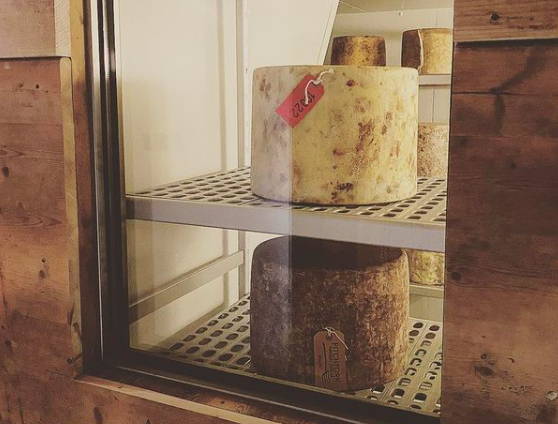 Tell us a bit about No.2 Pound Street

James Grant has worked in some of the U.K.s most prestigious establishments. He ran Wilton’s in St James’s, London, The Bluebird, alongside Celebrity Chef John Torode (AKA Masterchef) and with Fred Sirieix, Claridges Restaurant, Mark’s Club in Mayfair, The Lanesborough, The Carlton Tower and Lutyen’s in Fleet Street and Cliveden in Berkshire.

TV appearances: Masterchef, The One Show and Top Gear (the one where JC JM RH drove through the Yorkshire dales in black tie).

James writes a column in Speciality Food Magazine. He is an academician with The Royal Academy of Culinary Arts, Member of the SCA and training partner of the AoC.

Over his career he has always served cheese. For over a decade he and his wife have run No2 Pound Street, a wine shop and British cheese shop with delicatessen in the Chilterns. It is Buckinghamshire’s premier Artisan British Cheese Shop. No2 only sells British cheese. James travels the length and breadth of the U.K. to find taste and bring back some of the finest artisan cheese the country has to offer. He is a training partner with The Academy of Cheese and is proud to be able to teach people about a food that predates recorded history. Also he aims, through education to help train people to become Masters of Cheese.

Why did you enter the competition?

We won a Covid Bucks Business First Grant in 2020. In order to safeguard our staff & business we decided to utilise our very old heritage status barn that forms the out buildings at the back of our shop. We decided that the barn should be converted in to a modern & classic training space with a bespoke cheese ageing room. Having sought advice about how to keep the room cool from Alan Hayes and by using a fantastic install company TAG, we are now excited to have a state of the art affinage. We entered the competition to be part of the UK wide drive to help promote artisan cheese. Competitions like this only help support the artisan producers and SME’s that work tirelessly promoting real cheese. As a cheesemonger and now beginner affineur I am super proud to be able to launch my ageing room in such a brilliant way. I am sure that this will become a much loved event which will gain more and more traction every year.

What is your relationship with affinage to date?

We have kept cheese for over a decade – this year will be our first year as proper affineurs. In fact the day that the cheese ageing room was finally completed was the day that The Quicke’s actually arrived. We thought that this must be fate.

How are you approaching the maturation and why have you chosen this approach?

We are going to be ageing the cheese gently. Our room has been set a an agreed temp to allow the cheese to develop at an even pace. Occasionally I will be taking the cheese out for a little walk. This is something that a couple of extremely well versed cheesemaker’s and affineurs have recently taught me. It kind of kicks the cheese a bit, a bit of a wake-up call…

What are your expectations for the matured cheese, flavour profile after 9 months?

I would like the truckle to retain moisture and develop a rich dairy umami character. I also hope the microbiome of my new ageing store will add to the complexity of the finished product. There has to be a touch of mustard and horseradish closer to the rind, The interior heart of the cheese needs to reflect a sweetness of rich caramelised vanilla fudge and exceptional Cambridge burnt cream.